Here, at My Emulator Online, you can play Mario Kart 64 for the N64 console online, directly in your browser, for free. We offer more Nintendo, 3D Racing, Kart and Mario games so you can enjoy playing similar titles on our website. Why don’t you try?

Mario Kart 64 is an explosive evolution to the series that introduced a host of iconic, dynamic tracks and a nail-biting battle mode. Chaotic items and treacherous courses go a long way in making the game one of the definitive early kart racers. Each track is intricately crafted, the controls work great, and the game is just pure, unhinged fun. Beyond loads of quality, the expansive multiplayer and accessible gameplay ensure that Mario Kart 64 enjoys a lasting legacy, one that shines brighter than genre contemporaries such as Diddy Kong Racing and Crash Team Racing. Mario Kart 64 was unquestionably a classic in its time, and it holds up beautifully today.

As a game revolving around highly competitive racing and battling, the gameplay is the most important part of Mario Kart 64. Photo-finish races, heated, back-and-forth battles, and methodically routed Time Trial runs make up Mario Kart 64’s excellent breadth of content, and the tight controls mixed with a huge arsenal of weaponry make every race a responsive but chaotic party. Mario Kart 64 is the kind of game that you can play for hours on end and return to year after year. Single-player Grand Prix and Time Trial challenges, where you can vie for the Gold Cup and lightning-fast lap times, may occupy even skillful players for days and days, and racing and battling your friends is a positively endless source of fun. 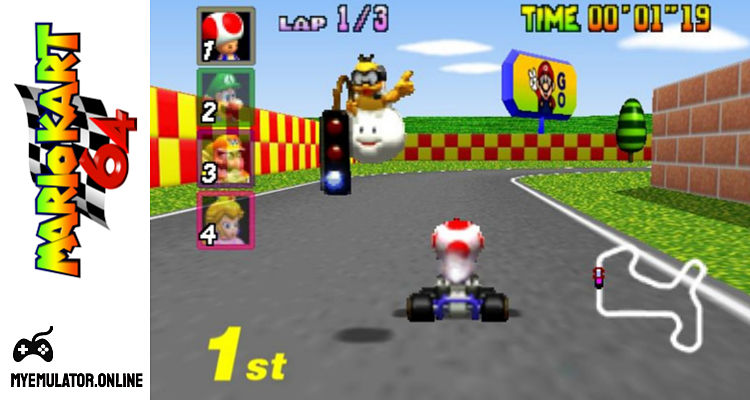 The multiplayer experience in Mario Kart 64 depends on some fantastically designed tracks. Tracks are a central component to any Mario Kart game. At the end of the day, these games are about racing, after all, and the tracks are an integral part of that. Mario Kart 64 delivers with sixteen awesome tracks–while that quantity may be considerably below par compared to kart racers today, the quality shines through. The tracks are great fun: a joy to race on, easy enough to blow through, but quite hard to master. Spanning plenty of colorful locales and comprised of lazy twists, sharp turns, and hidden shortcuts, the sixteen tracks really impress. From weaving through traffic in Toad’s Turnpike to marathon races on Rainbow Road, the tracks are a key element in Mario Kart 64’s charming, fun, and intense atmosphere.

Of course, you can’t forget Battle Mode, the intense, head-to-head arena where you and your friends can focus on lethality over speed. Balloon battles have you launching shells, laying banana traps, and raising general pandemonium while you slowly wear down your adversaries. Each time you are hit, you lose a balloon, and you’re out once they’re all gone. Over the course of a balloon battle, you’ll often see your three-ballooned friends slowly change their strategies from brazen, shells-blazing charges to shuddering, banana-laying, shakey sneaking through corridors and edges of the map (and speaking of maps, Mario Kart 64 delivers with some famously iconic battle maps. Block Fort, anyone?).

Do you want to know more about Mario Kart Characters? Check out this infographic!

Mario Kart 64 was fantastic on release. It’s still very, very good today, and is rightfully remembered as one of the classics of its genre and of the Nintendo 64 library (try Super Mario 64 emulator). While new titans like Crash Team Racing: Nitro-Fueled and Mario Kart 8 Deluxe now overshadow Mario Kart 64 with shinier paint, more intense showdowns, and way more content, the 64-bit kart racer still stands tall on its own. As one of the classics and one of the strongest of the genre, it’s worth a try whether you love kart racers or not.