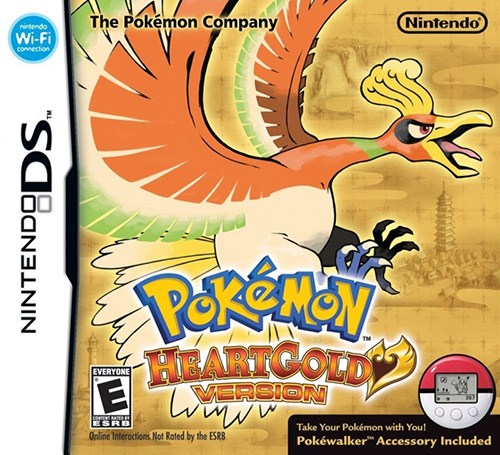 Here, at My Emulator Online, you can play Pokemon HeartGold Version for the NDS console online, directly in your browser, for free. We offer more Pokémon, Nintendo and RPG games so you can enjoy playing similar titles on our website. Why don’t you try?

For many, Pokemon Gold still represents the peak of the franchise. Gen II was a monumental step from the originals – polishing the formula introduced in Pokemon Red and Blue until it shone as bright as, well, gold and silver. So, when Game Freak announced that they would be remaking the Gen II games in the graphical style of Pokemon Diamond game and Pearl, many wondered if stepping back into the Johto region could possibly reclaim the same magnificence as the originals. Of course, there was always also the possibility that Pokemon HeartGold may even top the game it was remaking.

The story of Pokemon HeartGold follows the same narrative as the original. You play as either Ethan or Lyra as they embark on a journey across the Johto – and eventually Kanto – regions on the quest to become the greatest Pokemon trainer in all the lands. The story isn’t particularly deep, but the characters can be memorable – especially the gym leaders – and the setting itself remains one of the strongest in the series to date.

But of course, the real draw of Pokemon HeartGold is collecting, training, and battling the nearly 500 Pokemon that roam these regions. And what a roster it is. Pokemon HeartGold absolutely nails the balance between players who want a small, dedicated unit of Pokemon, and those who want to catch them all. As usual, the early game is spent grinding your way through weak enemy after weak enemy, but once you begin to form a strong group of Pokemon at your disposal, the game truly opens up to a wealth of possibilities.

There is so much to do in Pokemon HeartGold that it can almost feel overwhelming. While completing the main campaign is a significant undertaking in its own right, the players who want to see and do everything have quite a task at hand. In this sense, the game’s value is significant to those who are dedicated, but I also never felt forced down any optional paths that I wasn’t interested in. There is a welcoming degree of flexibility in how much of the game you want to experience, rewarding both the casual and hardcore gamer, and everyone in-between.

In terms of what’s new in this version, the most noticeable upgrade comes to the game’s aesthetics. The Nintendo DS represents the pinnacle of sprite based Pokemon games online, and Pokemon HeartGold does not disappoint in this area. The Pokemon, characters, and environments are all detailed without losing the charm of the original’s timeless art style. However, the lack of animation during battles can make the hours spent in this mode slightly dull after a while. The soundtrack has been completely remastered and manages to strike the perfect balance between capturing a sense of nostalgia while still sounding fresh compared to the Gameboy Color’s chiptunes.

All Pokemon that you collect can now follow you around on the overworld. It’s a small change that doesn’t really affect the gameplay, but it is a supremely endearing addition. There is also countless quality of life improvements that would be too long to list here, but certainly make this the definitive version of the game.

Pokemon HeartGold manages to refine what many perceived to already be bordering on perfection. It modernises a classic Pokemon game in all the right ways without sacrificing any of the charm or quality behind what made the original so beloved. And you can play it for free right now on your browser on MyEmulator.Online!