Here, at My Emulator Online, you can play Mike Tyson’s Punch-Out!! for the NES console online, directly in your browser, for free. We offer more Nintendo, Sports and Boxing games so you can enjoy playing similar titles on our website. Why don’t you try?

Old school style and flair run rampant in Mike Tyson’s Punch-Out!! In his bid to conquer the World Video Boxing Association’s three circuits, Little Mac has to take down numerous overpowered opponents. Catchy 8-bit tunes, vibrant arenas, and a whole host of personalities make your rise through the ranks an engaging, charming, and memorable experience. That’s a good thing, because the game can be quite tough, too, and with only three “lives” to advance through nearly two dozen vicious battles, you might be revisiting some of the early fighters again and again and again. 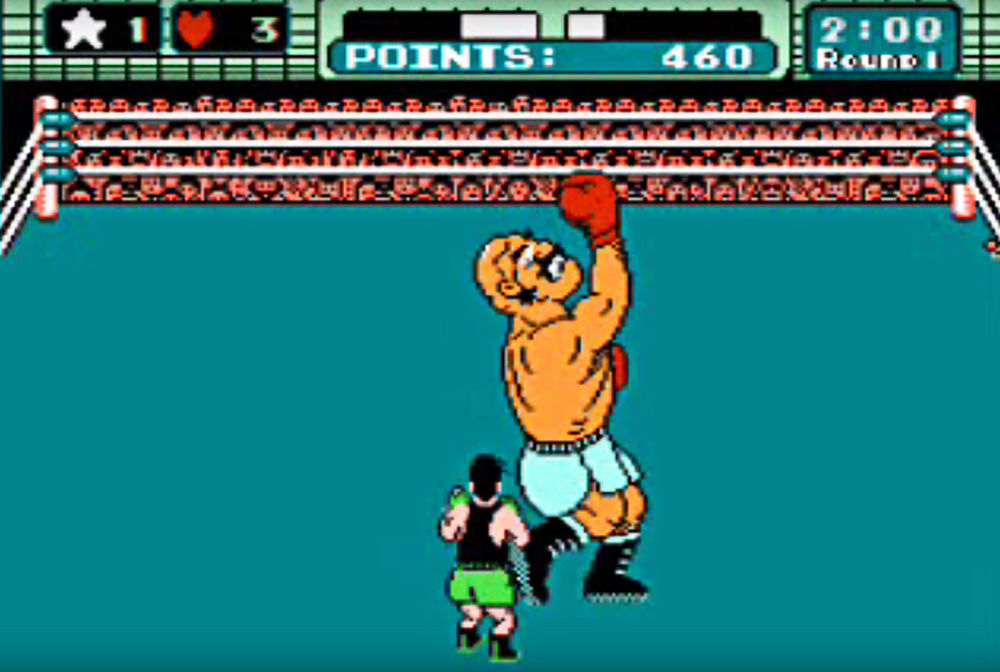 With a limited moveset and grossly oversized opponents, strategy reigns supreme in Mike Tyson’s Punch-Out!! Little Mac can tackle his adversaries with left and right jabs, left and right body blows, and a powerful uppercut that can only be unleashed after certain calculated counter-punches. He can defend himself by leaning to the left, leaning to the right, or by throwing up his gloves to block the attack. The Goliaths on the other side of the ring, meanwhile, will prance around with impunity while coming after you with a host of elaborate, fanciful attacks that quickly drain a careless fighter’s health meter. Your only hope–your best weapon, in fact–against such formidable opponents is to play with brains over brawn and strategy over style. In this sense, Mike Tyson’s Punch-Out!! is more of a puzzle game than it is a sports title. Adversaries like Mr. Sandman and Bald Bull will end your dreams in seconds if you are not careful, but by learning their styles and patterns, you can survive a slugfest and emerge victorious.

A product of its time, the biggest problem with Mike Tyson’s Punch-Out!! is that there just is not that much going on with the game. Once you get used to reading attack patterns and efficiently squeezing in jab after jab, you’ll have pretty much experienced the bulk of what the title has to offer, unless you are particularly craving some high score runs. At its core, the game is about pattern memorization, and that might get old after you complete it once–or, maybe you’ll get hooked on optimizing your strategy through one playthrough after the other, all the way until you can play the game blindfolded. However, if NES-style difficulty with lots of game overs and trial and error is not your thing, Mike Tyson’s Punch-Out!! might not hold your attention long at all.

Don’t let any of that stop you from at least trying the game out. Mike Tyson’s Punch-Out!! really is bursting with charm and rewarding take-downs. It’s a classic Nintendo title at heart, and even if it cannot hold your attention long enough for you to finish it, Little Mac’s climb to glory is an experience that everyone should at least familiarize themselves with.